Programs not compatible with macOS 10.12

3D Coat
Adobe Dreamweaver CS5 (crashes on launch)
Adobe Dreamweaver CS6 (must reinstall Java 6, opens and functions, crashes on Save As...)
Adobe Illustrator CS6 (installer error, if update from prior OS, make work after reinstall Java 6)
Adobe InDesign CC (installs, but has some rendering issues when dragging objects)
Adobe Photoshop CS5 (crashes on close)
Adobe Photoshop CS6 (installer error, make work if update from prior OS)
Apptivate
AVG AntiVirus (doesn't open)
AVG Cleaner (crashes at launch)
BOX Sync (brings up Console, floods with errors, doesn't work at all)
BusyCal (crashes at launch)
Canon EOS Utility 2.14.20 - program starts but does not connect to Camera anymore. No more photo import or camera remote control. Essential functions disabled therefore.
Carbon Copy Cloner 4.19 (installs and opens for use but does not actually backup)
CCleaner (does not open)
Cleanup SMB mess (icon has slash through it, Sierra throws error when launching)
Contacts (Apple's Application) Crashes FOR SOME at launch
Disk Warrior (launches and works for a while but crashes in the end before replacing the rebuilt directory)
EazyDraw 7 (crashes at launch)
ESET Cyber Security Pro 6.2.6.0 (not working when copied with Migration Ass., can't clean install)
EtreCheck (crashes during scan)
Final Draft 9 (crashes at launch) (Update to 9.0.9 fixes problems)
Freemacsoft LiteIcon 3.6.3 (Error message at launch even when SIP is disabled)
Greek Radio (icon has slash through it, Sierra throws error when launching)
GPGTools (not working with Sierra yet, they are working on it at @ https://gpgtools.org)
GPSPhotoLinker (with 10.10 and 10.11 it required manual install of Perl 5.10 and deactivation of System Integrity Protection (csrutil) but now stopped working at all with 10.12 (http://www.earlyinnovations.com/forum/viewtopic.php?f=2&t=2513&start=10)
GutenPrint (current version does not work and is disabled by the macOS installer)
Identify 551 (developer has announced that he has ceased development on this program, as well)
Karabiner (needs major changes, not coming anytime soon)
Little Snitch 3.6.3 (see nightly build instead https://www.obdev.at/products/littlesnitch/download.html)
Maintenance (crashes at launch)
Movist (crashes after some minutes)
MPlayerX
Online Bible 4.2.1 (crashes with Internal Error due to undocumented function in Sierra GM)
Patterns (regex app from the MAS - marked as incompatible)
Pulse Secure 5.2r2 (backend dsAccessService seg faults when run)
Pyware versions 8.0.0, 7, 6, and lower (due to Apple's MRJ Java--not able to be installed on 10.12)
Quicken Essentials for Mac 1.7.4 (icon has slash through it, Sierra throws error when launching)
RapidWeaver 7 (Opens projects and appears to work but crashes when previewing Site) - Working after update to 7.0.4
Razer Synapse 2.0. (Loads but can't detect device(s))
Safari Technology Preview 9.1.2
Seil (needs major changes, not coming anytime soon)
SIMBL (SafariStand etc.)
Splashtop Streamer (installer will crash on fresh installs, but will stream if previously installed on El Cap then updated to Sierra)
SyncTwoFolders 2.19 (Crashes after selecting destination or target folder)
Yosemite Disk Utility patched to run on El Capitan (crashes at launch)
Microsoft OneDrive (Crashes at Launch) -- works for me -- works as of PB4
Western Digital Disk Tools (Complains about needing to be launched from Applications folder)
WhatsApp Desktop (always recommends moving to Application folder when it is already there, and will lose login details prompting QR scans every time OS restarts) -- ChitChat works for me
WriteRoom 2.5.1 (marked as incompatible)
ZenMate (makes initial VPN connection then disconnects) 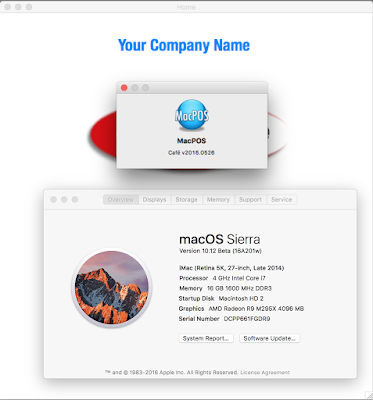 Apple unveiled at the WWDC their rebranded operating system for Macs.  It is now macOS.


We are happy to report that MacPOS v2016 runs on the macOS preview without changes.