Showing posts from October, 2011
Show all

We have posted a new trial version of MacPOS v2012 . This trial is compatible with Mac OS X 10.5, 10.6 and the new 10.7 Lion operating system. Download Page for MacPOS Trial
Read more

October 30, 2011
v2012 is the next major update of MacPOS which is now being beta tested by several customers. They are providing feedback on the new version and noting any issues that may arise during the updating process. This version will be required if you need to run Mac OS X Lion 10.7 You will LOVE the speed increases ranging from 5-30 times faster than the previous versions of MacPOSX and the improved User Interface changes and additions makes MacPOS even easier to use. Approximately 30% of the code has been updated and or replaced with more modern programming techniques enabling it to run on Mac OS X 10.5 - 10.7 We will not be providing a PPC compatible version of v2012. Those requiring PPC compatibility can still purchase MacPOSX v2011 for older Macs and OS X 10.3 and 10.4 support. This upgrade is Free  for those who purchased MacPOSX Pro or Standard v2011 after the release of OS X 10.7 Lion in August 2011.  Pricing for the upgrade is determined by the version of MacPOSX that y
Read more 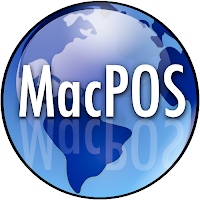 Now that MacPOSx has been officially rebranded to its original namesake MacPOS ,  we have given it a new icon. We hope you like it.
Read more

MacPOS v2012 beta with integrated Mercury Payment Systems  credit card processing was placed into a production today and we had our first swipe of the millions to come in a secure encrypted workflow environment. An existing MacPOS customer performed a successful upgrade from MacPOS v2011 to the beta v2012. Along with faster transaction times and the most competitive rates in the industry they also will be taking advantage of the free Gift Card program offered to  Mercury Payment Systems  merchants. The Mercury Payments credit card authorization software is integrated directly into MacPOS software. There is no longer a need for a separate payment processing application. Approval times of under one second have been observed consistently during development. We are confident that our customers will love the huge speed bump in MacPOS and the extra security that  Mercury Payment Systems  brings to CC approval handling. MacPOS Home Page
Read more

October 19, 2011
MacPOS is now integrated with Mercury Payment Systems E2E PCI-DSS compliant credit card payment processing system. Mercury Payment Systems E2E: End-to-End Encryption secures card data the instant a card is swiped E2E secures card data by encrypting it at the instant a card is swiped or manually keyed, and keeps it encrypted throughout the transaction. End-to-end encryption reduces the number of systems handling sensitive card data. When encrypting card readers are combined with support from a payment gateway or payment processor, sensitive cardholder data – and the PCI requirements to protect it – are eliminated from the point-of-sale (POS) system. Today’s POS Systems Today’s POS systems handle sensitive card data in plain text when it is initially entered. Modern malicious software is designed to steal credit card data by intercepting it as it is passed from peripherals, such as magnetic card readers and keyboards. Malware will even steal card data out of the computer RAM be
Read more
More posts